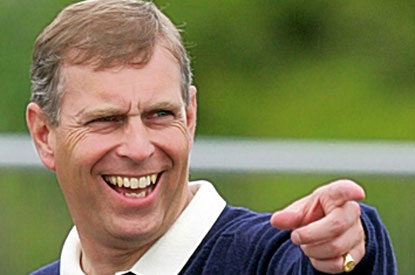 Regal nobody and inferior sibling to Prince Charles, Prince Andrew, is in hiding this morning after Wikileaks revealed how the Prince shat on a coffee table in a meeting with a US Ambassador, while shouting “don’t you know who my Mum is, you fucking peasant?!”.

The great British Public is set to call for a national day of flogging, and has designated the Prince the affectionate nickname of “That Royal Twat”.

The Wikileaks revelations have revealed how Andrew, who has only ever served either himself of the Royal Navy is actually paid – by the British taxpayer – to promote their interests abroad. In the private sector.The Prince is also said to have complained  to officials that corrupt British arms firms get a raw deal and that the French are “always getting away with dodgy shit”.

It is yet to be confirmed whether the Prince has worked a single day in the private sector in his entitre pampered life, as media outlets continue to digest the news that sets public perception of the Royal Family back by, ooooh, a couple of hundred years or more.

The news comes just months after former Royal Fluffer Fergie (ex-crack addict from the Black Eyed Peas), tried to sell the Prince’s underpants to Ukranian sex traffickers, and is set to cause further embarrassment to the Royal Family.

The Queen has yet to give her response to the revelations, but a statement from Clarence House confirmed: “The Royal Family would like to distance itself from the vulgar behaviour exhibited by this spoilt little bastard, and we can confirm that his monetary allowance is hereby revoked. That should teach the little cunt to quit his meddling.”