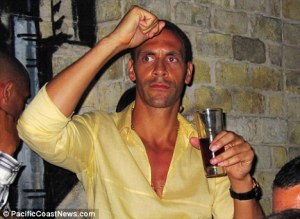 Rookie Manchester United defender, Chris Smalling, hopes to  follow in the footsteps of fellow centre-half, Rio Ferdinand, with Sir Alex Ferguson placing him on a fast track cocaine addiction programme and schooling him in the art of “Mercing”.

In an exclusive interview with Sky Sports News, the former Fulham defender declared his admiration for Ferdinand, who has won nearly as many medals as the lesser-valued but infinitely more useful John O’Shea. The veteran defender has taken Smalling under his wing and is helping him find adequate distractions to ruin an otherwise promising career: “Rio has been so good to me since I came here, he’s already hooked me up with Anderson – we often go out clubbing  and I want to start pistol whipping fools and talking complete shit on twitter over the coming months, but I’m not getting ahead of myself just yet.”

United Boss, Sir Alex Ferguson has even cited Smalling as the long-term replacement for Ferdinand at the heart of his defence, stating: “Chris is a young lad, but he is learning his trade. I’d love, in four or five years time, to find out about his fully-fledged addiction to gak and, with any luck, he’ll fleece the fuck out of me for an extortionate new contract – just like Rio did. I just hope I’m here by that time to be taken in by him and fooled by his agent again – he’s very promising in the air, after all.”

Ferdinand is currently away on England duty and is hoping to retain the embarrassment on Fabio Capello’s face by wangling the Captain’s armband once more.